The ’19 wide receiver group ranged all over the place. We got some monster performances from Michael Thomas but also had a lot of duds from superstars. We even a complete meltdown from one of the best in the game. Overall, there is a lot we can take away from the ’19 season in order for us to have a dominant ’20 season.

Going into the opening week, there were a lot of question marks surrounding a couple of players. We had reports that A.J. Green would be healthy by Week 4 or 5, so that kept his ADP around 70, which turned into a wasted sixth rounder for teams.  Tyreek Hill went from being drafted around 80 to a first rounder in some leagues after his case was dropped. Antonio Brown was also another huge question mark when Week 1 rolled around. After getting released by the Raiders during the preseason, Brown got picked up by the Patriots and fantasy teams swarmed to pick him up or trade for him. However, his time with the Patriots only lasted one game before getting released. This year, Brown is currently being drafted in the last few rounds as a low-risk, high potential player.

There were also a lot of speculation that turned out to be true. Chris Godwin finished second in total fantasy points scored after being a favorite mid-round sleeper in drafts. A.J. Brown is shooting up drafts boards for the ’20 season after putting up a terrific rookie season that included 1,000-plus yards and eight touchdowns. And Michael Thomas established himself as the clear No. 1 receiver for the ’20 season by putting up over 375 fantasy points, which is 99 more points than the second best receiver. 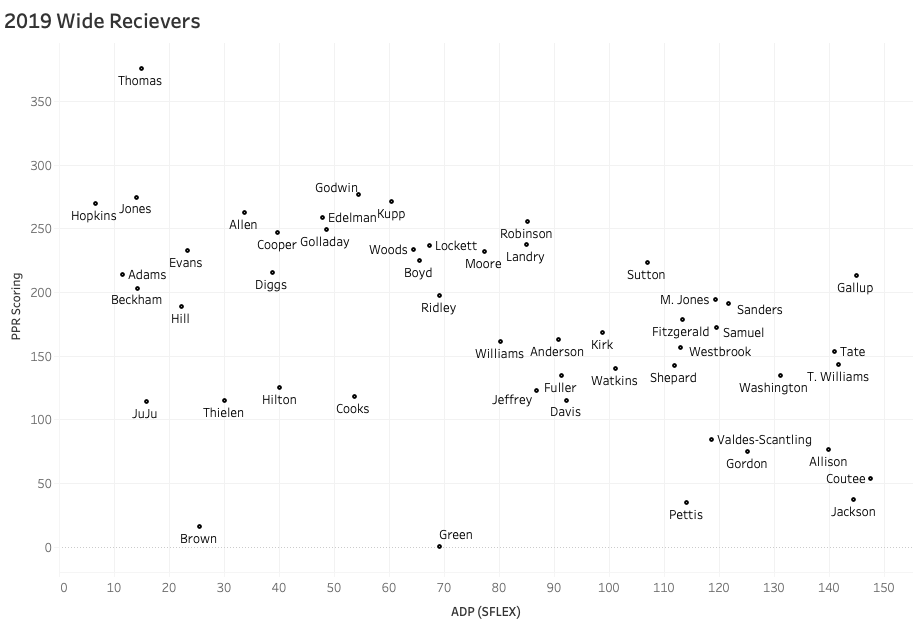 It always fascinates me to look back at data from the previous season and study trends in drafting. One of the more shocking trends happened to be in the ’19 WR class. If you look at the chart above, you will notice almost an even trend line between players drafted between ADP 1-90.

A lot of the top tier receiver, such as Odell Beckham, JuJu Smith-Schuster, Adam Thielen, Tyreek Hill, and TY Hilton, underperformed big time. Most of these were caused by injuries, but also some had weak performances when active. Meanwhile, in the middle tier of drafts, we had players like Cooper Kupp, Chris Godwin, Julian Edelman, Kenny Golladay, and Allen Robinson all have huge seasons.

On a typical projection graph, you would normally see a slow decrease in points the further down the ADP you go. However, ’19 wasn’t a normal year. In fact, players drafted between 50-75 actually outperformed players drafted between 25-50 by an average of nine points! If you take Thomas out of the equation, 1-75 turns out to be very even. After an ADP of 100 is where we first start to see the biggest drop in points. This is where we start to see a lot of No. 2 receivers on top passing teams go.

Takeaway: Wait on receivers for this season. Yes, there will be early spots in the draft when you can take high receivers, but with such depth at the position, you can afford to draft your WR2/WR3 in Round 5 or later. A draft strategy I will be implementing in leagues this year is to go with three running backs within the first four rounds, and then use Rounds 5-8 to add receiver depth.

A couple of sleeper receivers that I am looking to target (SFLEX Rankings):

Allen Robinson (61.04). Robinson is coming off a huge season with 1,147 yards, 98 receptions, and seven touchdowns. With the addition of Nick Foles, I expect the passing game to come more into play for the Bears this season as well as more scoring chances. Throw in the fact that Chicago receivers have the easiest SOS, Robinson is a mighty fine pick in the fifth or sixth round.

Devante Parker (74.04). Parker is another intriguing option in the middle rounds. After finishing last year as the 11th best fantasy receiver, Parker will be joined by Tua Tagovailoa in a revamped Miami offense. After Week 11, Parker led all of the NFL in receiving yards with 733. I expect Parker to build on that hot streak, and Miami to compete in a lot more games.

Deebo Samuel (88.52). Samuel will enter the season as the clear No. 1 receiver threat for the 49ers. With Emmanuel Sanders leaving, I expect head coach Mike Shanahan to get Samuel more involved in targets, which will add a lot of value in PPR leagues.

D.K. Metcalf (75.57). Metcalf played on 83 percent of Seattle’s offensive snaps in his rookie year, which is impressive for any player, let alone a rookie. He also accounted for 30 percent of Seattle’s receiving yards. Metcalf is going to be one of my favorite receivers to target in drafts because I expect Pete Carroll to get him the ball more often in his second year.

Diontae Johnson (138.69). Johnson is one of my favorite receiver sleepers, which seems the case for many early drafters. With Big Ben Roethlisberger back from injury, the Steelers offense should be much more efficient. Johnson put up a 59-680-5 line his rookie season and could compete for the No. 2 receiver spot in Pittsburgh.