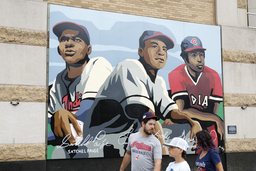 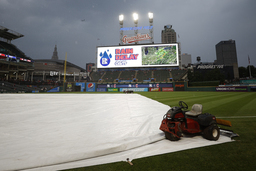 The tarp covers the infield before a scheduled baseball game between the New York Yankees and the Cleveland Guardians on Friday, July 1, 2022, in Cleveland. (AP Photo/Ron Schwane)

CLEVELAND (AP) The series opener between the New York Yankees and Cleveland was postponed by rain Friday night, the latest weather issue for the Guardians, who have already played five doubleheaders at home.

They'll play their sixth at Progressive Field on Saturday as the teams will have a split doubleheader, starting at 12:10 p.m. The second game will begin at 6:10 p.m.

Cleveland also played a day-night doubleheader on Tuesday, and the Guardians are scheduled to play a doubleheader Monday in Detroit.

Friday's game was called at 7:30 p.m. - 20 minutes after the scheduled first pitch - with thousands of fans already inside the ballpark, monitoring the local radar on the giant scoreboard in left field.

This weekend, the Guardians are celebrating Larry Doby breaking the AL's color barrier with Cleveland 75 years ago.

On Friday, the team unveiled a large mural outside of Progressive Field of Doby flanked by Satchel Paige and Frank Robinson. Paige was the first Black pitcher in the World Series (1948) while Robinson became baseball's first Black manager (1975).

Doby's story isn't as well known as Jackie Robinson's, but he was subjected to the same hatred as the iconic Hall of Famer.

''I'm glad that we're celebrating his ability to be that tough and to absorb everything that I'm sure he had to, and stuff that we don't know he had to,'' Guardians manager Terry Francona said. ''But I just want to make sure that we're not celebrating the fact that we're treating people equal. That should be a given.''

Yankees: RHP Jonathan Loaisiga (right shoulder inflammation) will throw live batting practice in Tampa, Florida, on Saturday. He last pitched in the majors on May 22. ... RHP Miguel Castro was placed on the paternity list, but is expected to rejoin the team in Pittsburgh on Monday.

Guardians: C Austin Hedges (concussion) ran the bases before the game and did other conditioning work as he nears a return. Hedges went on the IL earlier this week, a few days after taking a foul tip off his mask. ... OF Oscar Gonzalez (abdominal tightness) underwent an MRI and the team is expected to provide an update.